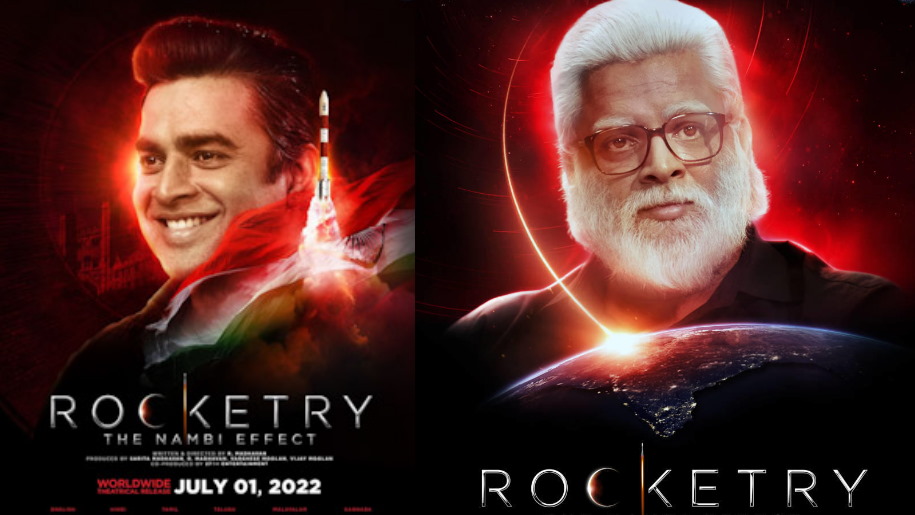 Nambi Narayanan is an eminent scientist of ISRO but was arrested on false charges of espionage. Later he was exonerated of all the charges but only after a long battle with the system and society. Nambi walks through his life and narrates everything the good and poor side of his life – his scholarship from Princeton University, declining a lucrative job offer from NASA, and sealing an unbelievable deal with the CEO of Rolls Royce. He even runs like James Bond on snow to escape from the clutches of foreign agents chasing him to get crucial parts of a rocket. He is arrested for espionage and his family suffers mental and social trauma. But he comes clean from the charges. The movie is made in Hindi, Tamil, and English

• Madhavan honestly covers every aspect of Namib’s life, especially his feats and challenges
• Madhavan’s makeup to dialogue delivery and expression makes him the real Nambi
• Simran portrays Meena Nambi with grace and absolute conviction
• Sam Mohan as Unni stands out among the supporting actors
• In the Hindi version, Shah Rukh Khan looks impressive as a news anchor

The poster features a young R. Madhavan as Nambi Narayanan with a rocket in propulsion mode. The poster is given a dark background and Madhavan’s face is highlighted with a reddish halo. The movie name and other details are provided at the bottom. Jugjugg Jeeyo is a multi-starrer family drama by Raj Mehta. The movie centers on a Punjabi Saini family of Patiala struggling to keep its flock together. Both the senior and junior Saini couples are on the verge of divorcing but they agreed to come together for the last time for the wedding of the daughter of the Saini family.

• The movie maintains a pace that keeps viewers engaged
• Scenes between Kiara and Neetu are emotionally moving
• Neetu brings calm to every scene instead of a loud Punjabi mom
• Kiara also delivers a restrained performance of a self-made, independent, and career-oriented woman
• Anil Kapoor as a modern-day father looks cool

Kuku Saini (Varun Dhawan) and Naina Sharma (Kiara Advani) are childhood lovers but they don’t make a good couple as they decide to part ways soon after their marriage. Post-marriage they shift to Toronto where they decide to take divorce but after the wedding of Kuku’s younger sister, Ginny (Prajakta Koli). Back home dad Bheem (Anil Kapoor) and mom Geeta (Neetu Singh) are also fed up with their long-term marriage and want to divorce after Ginny’s wedding.

Dad Bheem is a talkative person who doesn’t think before talking. He reveals everything even about his extra-marital affair to Kuku. But mom Geeta maintains the calm. Also, she has good chemistry with her daughter-in-law. In a scene, Ginny is seen dancing with her girl tribe during her pre-wedding bash when she accidentally kisses her ex-boyfriend who she still loves. In another scene, Neetu and Kiara are in a kirtan where a Guru Ma performs a special ritual so Kiara gets pregnant.

The poster shows the entire Saini family with the … Read more Laal Singh Chaddha (Aamir Khan) lives on a farm with his doting mother (Mona Singh) who is everything to him. He has a physical disability that requires him to have leg braces. While society considers Laal a disabled person, his mother gives him the strength to do well in life. One day Laal removes his leg braces and starts running. Soon he joins the Indian army, makes friends in the army, and goes to war. Also, he falls in love, and his heart breaks. But Laal Singh Chaddha leads a happy life despite facing physical, mental, and emotional challenges.

The three-minute trailer gives a glimpse of the life of Laal Singh Chaddha from a physically-challenged child to becoming a soldier. Mona Singh looks impressive as the mother of young Laal Singh. Naga Chaitanya has a limited role as a close friend and co-soldier with Aamir Khan. But Kareena Kapoor remains the most elusive character in the trailer. She is the love interest of Aamir Khan but their chemistry is missing in the trailer.

Viewers aren’t impressed with the things Aamir Khan is doing in Laal Singh Chaddha. First of all, they find Aamir Khan giving the same popped-eyed expressions he gave in a bunch of his recent films. And they said … Read more • Weak story with characters added from nowhere to it
• Songs drop in randomly and viewers are left surprised
• AR Rahman fails to create the magic, especially with the popular Whistle Baja from the first part
• Tara Sutaria is like a glamor girl with no direct association with the story

Laila (Nawazuddin Siddiqui) is a hobbyist magician and cybercrime kingpin who wants to rob people by luring them to play interesting online games. Indian government hires Babloo (Tiger Shroff) to prevent Laila from executing his ill intentions. But Babloo falls for Inaaya (Tara Sutaria), Laila’s sister. Unaware of the ill motives of her brother and boyfriend, Inaaya keeps enjoying her life. The poster features Tara Sutaria sitting on the driver seat of a luxury sedan and Tiger Shroff aiming at a target from the roof of the vehicle. The movie’s name is written on the body of the car. Also, seen are red lines that are guns targeting their car. The background of the poster is kept black to give an idea of the movie.

If you aren’t a die-hard fan of Tiger Shroff, you won’t go to see the movie. Though the movie has action and romance it fails to maintain suspense and … Read more